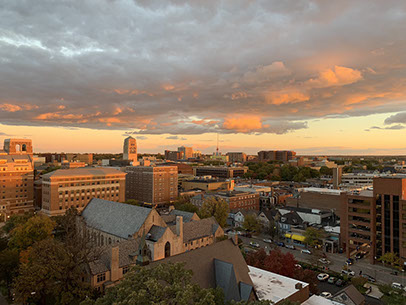 Washtenaw County Circuit Court heard arguments last week from the City of Ann Arbor and Gelman Sciences regarding the cleanup of a large 1,4-dioxane plume underneath the city. In preparation for further hearings scheduled for May 2021, the Ann Arbor City Council voted unanimously to extend the contract with their retained law firm, bringing the City’s legal bill to $750,000. This is the most recent expense in a decades-long attempt to contend with the underground pollution, including an allocated $40,000 for in-home monitoring of potentially contaminated residences last year.

The plume’s origin can be traced back to Gelman’s 1960’s manufacturing of micro-porous filters and subsequent waste disposal practices. Production of these filters, ironically designed for detection of air and water pollution, gave way to the consequent “Gelman Plume”, endless citizen complaints, clean-up efforts, and legal negotiations.

Signs of underground pollution first surfaced in the 1960s due to a faulty treatment approach and leakage from unlined lagoons  but yielded very little news coverage and even less governmental action. In 1984, the first major reporting on the dioxane pollution was sparked not by the government nor the media, but by a private citizen. Daniel Bicknell, then a graduate student at the University of Michigan Department of Environmental and Industrial Health, collected and tested his own water samples.

A state Department of Natural Resources official sharply criticized Bicknell’s results, quoted by The Ann Arbor News as saying, “I’m inclined to believe Bicknell’s data isn’t worth a toot. It’s extremely suspect.” When a county-backed study confirmed Bicknell’s initial findings 16 months later, the same official did a prompt about-face, acknowledging the severity of the issue. Bicknell later went on to a successful career at the U.S. Environmental Protection Agency (USEPA) and even returned to Ann Arbor in 2015 to advise local officials on the Gelman Site remediation.

After news of the contamination broke, the State of Michigan sued Gelman, Gelman sued the State of Michigan, and the residents of Ann Arbor sued Gelman. While the case has been slowly litigated in the courts, private citizens have stepped up. Since 1995, Roger Rayle has led the Scio Residents for Safe Water, a watchdog group that closely monitors the cleanup efforts of Gelman and the government in order to hold them accountable. Rayle is also a member of the Coalition for Action on Remediation of Dioxane, which recently has been advocating strongly for a  USEPA intervention through the federal Superfund program.

After months of postponement, Ann Arbor City Council voted last November to petition the USEPA for consideration of the Gelman site for its Superfund National Priorities List (NPL). The USEPA has already completed a preliminary evaluation of the site that found it deserving for consideration of NPL status, prompted by a 2016 petition from neighboring township officials and a local Sierra Club chapter. While then-Governor Rick Snyder declined to move forward with the NPL approval process, advocates of the Superfund effort are hopeful incumbent Governor Gretchen Whitmer will be more receptive.

With so many variables involved, it is impossible to predict how both the court case and Superfund petition will play out. Irrespective of the outcome, the citizens of Ann Arbor have demonstrated a clear passion and attentiveness for the safety of their community. In 212 Environmental’s experience, projects like this can only be resolved when stakeholders can put aside their differences and work together towards a common goal.